West Hatch students say we would be stronger in Europe. 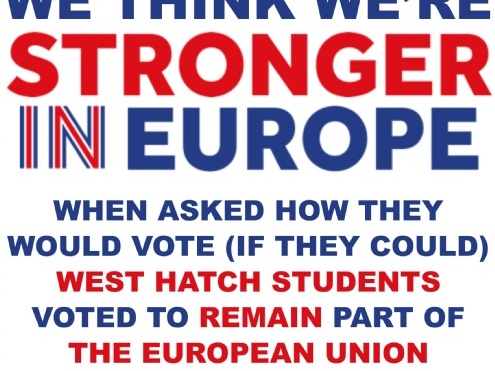 After listening to the arguments; West Hatch students back the campaign to remain and vote in favour of Britain’s continued membership of the European Union.

Today is the day Britain makes a very important decision: whether to leave or remain a part of the EU.

At West Hatch students have voted to remain a part of the European Union.

As soon as the referendum date was announced, the debates began. It all started, in March, with an assembly to highlighted some of the main arguments for both sides. After the assembly and some further discussions, students were able to cast their vote, in our mock referendum.

The result was clear: 64% decided Britain would be stronger in the European Union, as they voted to remain.

This was not the end of the debates though. During Form time, classes continued to discuss the issues. It was not just Form where the debates occurred; discussions in Economics lessons and Geography lessons also focused on Britain’s position in Europe.

Some arguments may have appeared trivial, but they were relevant; such as the student who argued we should stay in the EU after reading ‘only to be sold in the EU’ on a packet of Magic Stars. The issue of Europe was also mentioned at our Year 12 Gifted and Talented evening, where we covered studying in Europe and the various academic and research opportunities open to British students, due to our membership of the EU.

As always, our Library was the source of much information, with the staff creating a display dedicated to the debates surrounding the European Union. Discussions also spilled out into the playground, with students debating how they would vote and what they think the consequences would be. Many staff also found themselves being asked the question “how will you vote?”.

Mr Towsey, who had delivered some of the assemblies about the referendum, said “it’s amazing to see so many of our students getting involved with the debates and discussions surrounding the EU referendum. They have really listened to the various arguments and formulated their own opinion. This is a decision which will affect them, so it’s great to see that they are so engaged with it – it’s just a shame they can’t vote in the actual referendum.”

This has certainly been a topic of much debate and one which will not necessarily end once the final results are announced.