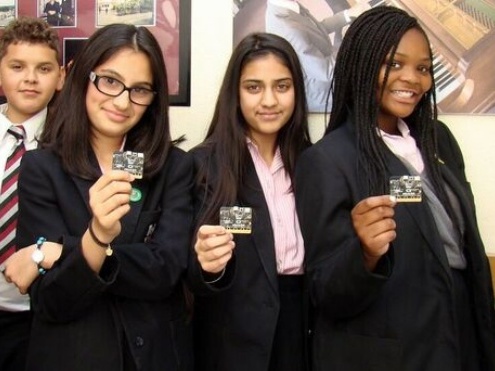 Students at West Hatch High School, Chigwell, are among some one million students taking part in the BBC's Micro:bit initiative.

Students at West Hatch High School, Chigwell, are among some one million students taking part in the BBC's Micro:bit initiative.

The BBC and its various partner have launched the BBC micro:bit - a pocket-sized, codeable computer that allows children to get creative with technology.

In the BBC’s most ambitious education initiative for 30 years, up to one million devices will be given to every 11 or 12-year-old child in Year 7 or equivalent across the UK, for free.

Sara Trickey, Head of Computing and ICT at the High Road school, said: "We have launched the BBC Micro:bit with our Year 7 students.

"Each student in Year 7 has been issued with their very own programmable device to get them started in the world of computer programming.

"These will help students develop a number of important skills for modern life in the world, including computational thinking and problem solving.

"We have set students an ongoing project this half-term to program something amazing with their microbits - some projects include a Hogwarts sorting hat and a magic 8 ball fortune teller!

"As well as these, the BBC’s micro:bit website gives a whole host of projects for students to try – including making their very own digital watch!

"We are very excited to be able to give this phenomenal opportunity to students and we are very much looking forward to seeing their completed projects in a few weeks time!

In the 1980s, the BBC Micro introduced many children to computing for the first time.

Part of the BBC’s 2015 Make it Digital initiative, the BBC micro:bit builds on the legacy of the Micro for the digital age, and aims to inspire young people to get creative with digital; develop core skills in science, technology and engineering; and unleash a new generation of digital makers, inventors and pioneers.

BBC Director-General Tony Hall said: "Just as the BBC Micro introduced millions to personal computers 30 years ago, the BBC micro:bit can help equip a new generation with the digital skills they need to find jobs and help grow the UK economy.

"It's the unique role of the BBC that allows us to bring together an unprecedented partnership to deliver such an ambitious project."

The BBC micro:bit is a pocket-sized computer that can be coded, customised and controlled to bring digital ideas, games and apps to life."