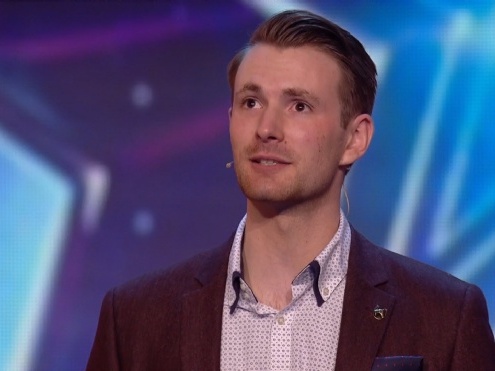 Richard, who left the High Road school six years ago to pursue a career in the Army, performed a patrotic magic trick telling the story of Fergus Anckorn, whose love of magic helped him survive life in a prisoner of war camp during the Second World War.

Fergus – who at 97 years old is the oldest member of the Magic Circle – was introduced on stage by Richard at the end of his performance.

Richard left West Hatch at the age of 18 and joined the Army, a year later being posted to the Band of the Parachute Regiment.

In 2014 he was promoted to Lance Corporal and posted to the Band of the Household Cavalry where he learned to ride a horse.

Richard rode in the Trooping of the Colour last year and was at the recent Royal Windsor Horse Show working 16 hours a day.

Because he was working during the London auditions for this year’s Britain’s Got Talent, Richard attended the auditions in Liverpool.

While at West Hatch Richard was best known for his music playing the piano and trombone. He learned the latter at Redbridge Music School going from brass club to symphony orchestra with the music school playing at many venues including the Royal Albert Hall.

He was deputy head boy and won the Sixth Form Service to the School community award in 2009.

Music teacher Mauro Sheehan said: "Massive congratulations to Richard Jones, one of the nicest people I've ever had the pleasure of teaching and playing piano for. A brilliant act, lovely guy.

"We also share a birthday, and he's often the first person to message on the day."

Richard is the fourth ex-West Hatch High School student to reach the final of ITV's Britain's Got Talent in the last five years after singers Charlotte Jaconelli and Jonathan Antoine were runners-up in 2012 while Sonny Jay - with the band Loveable Rogues - was also in the final in the same year.