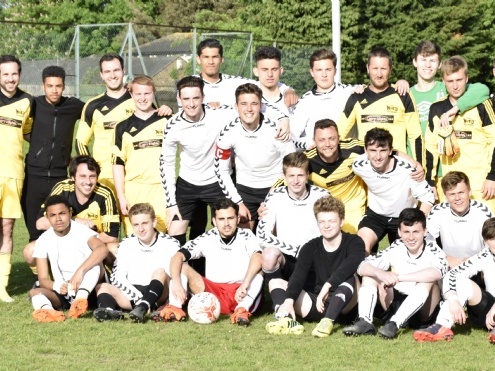 Once again the pupils remained in the staff shadows, as for the 4th consecutive year, the staff XI retained The Jon 'Otis' Redding Shield, this time in a closely contested match that was decided following a tense penalty shoot out.

Once again the pupils remained in the staff shadows, as for the 4th consecutive year, the staff XI retained The Jon 'Otis' Redding Shield, this time in a closely contested match that was decided following a tense penalty shoot out.

The Chigwell Metropolitan Police ground was the venue for the widely anticipated match on Friday afternoon. A much depleted staff XI, due to injury and intervention were matched up against the recently successful Essex Cup winners and it was the latter that started the game much better as Eren Muti, scorer of two goals in the Essex cup final, capitalised on staff nerves early on to dangerously shoot wide off the target.

As the games first period continued, the staff settled into their game rhythm and honorary staff member, Tommy Ripsher, returning for a bow in a staff shirt, looked to threaten from the wide areas. However, it was the pupils who would have the better of the chances as the staff, captained for the first time by Dave Morgan, struggled to deal with the pace and youthfulness from all areas. A super Giggsy'esque run by Jack Harris was denied with a last ditch Morgan tackle and staff defensive errors contributed to chances but were dealt superbly well by token staff goalkeeper Freeman. The game went in 0-0 after the first third with little between the two sides.

Following a few pupil changes, the game would open up into the 2nd 35 minutes and Ex-student George Newton offered two good chances as he tested James Crowe's goal. Jamie Howell at this point was doing his usual very best to kick anything other than the ball but his experience in the centre back role would be much needed. The games opener would come following a lovely neat passage of play down the staff right hand side, a lay off by Leonard and cross by Student teacher, Sean Makins was found by Newton who turned and swivelled in once movment before firing past a helpless Crowe, 1-0 staff. It was very quickly number two, and as a harmless shot seemed to be trickling wide, a Crowe error, allowed the returning Ray Flowers to tap the ball into an empty net for his customary staff goal.

As the game, went on and into the final third, the staff would rue their small selection of squad, although Tester and Hoy were attempting to dominate the football it was apparent that fitness was catching up to them. With year 11s Ben Stevens and Jayden Francis now on for the pupils, they would find legs and were threatening more and more. George Turner, headed over from point blank range but would atone for it as he tapped in to half the deficit with 20 remaining. The score was level with 10 minutes to go, when the ball fell to Eren Muti following a defensive mix up and the pupils were now back in with an opportunity for the winner. As the game ended, the scores were level at 2-2 and the game would be decided on a penalty shoot out.

Following misses from Flowers (wide) and Hoy (hitting the upright), Eren Muti had the opportunity to win it but blazed over and into sudden death it went as nerves were further increased. Frankie Gibson, stepped up first for the pupils but seen his effort balloon over and Shane Coffey would be handed the chance to grab the winner. He would duly oblige with a calm effort to the keeper's left and the staff would retain the shield once more.

The staff XI and students would like to thank all players involved, staff and pupils who came to watch and of course the Metropolitan Police Ground for a great venue and hospitality. Role on next year and possibly further pupil humiliation....that's 4 on the spin now.