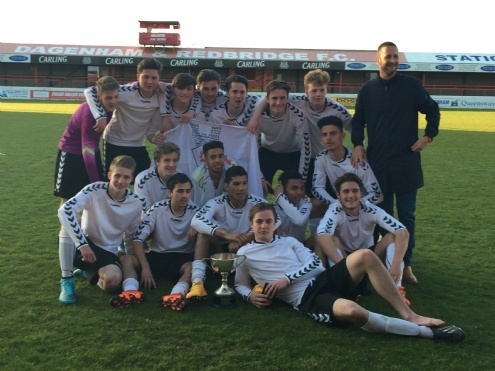 Mr Hoy's West Hatch First XI avenged last years final disappointment this evening to reign victorious, 4-3, in an epic u19 Essex School Cup final. In a re-run of last years final, West Hatch were again pitted against selective grammar school Southend High School for Boys in what would be another gruelling encounter at Dagenham & Redbridge FC.

With a full squad to select from, Hatch started well with Eren Muti, in bullish mood, slipping in Joe Cloake before eventually the ball was scrabbled of the goal line. Following a tentative 15 minutes, it was Hatch who went in to the lead as Eren Muti, playing a lone striker, cleverly rolled the defender before drilling a fierce shot passed the hapless Southend keeper. However, the joy was short lived minutes after the re-start as a ball was crossed into the Hatch box and as the defenders failed to clear,  allowed a sloppy equaliser to level the tie.

Southend began to settle and pick the passes in the central area as the half went on, although not creating many clear cut opportunities due to a resilient Hatch back four. Eren Muti again went close with a superb header and the experienced Stephanos Ladoukakis hit a nice shot that was well saved by the keeper. With the half drawing to a close, Hatch were awarded a soft penalty, after the referee adjudged that a foul had been committed from an in swinging corner. With skipper's duties and a cup final goal on his mind, up stepped Ronnie Smurthwaite to the spot and a rather fortunate penalty trickled down the middle of the goal, again passed the committed keeper to make it 2-1 at the break.

An inspirational and motivational half time team talk from Mr Hoy, didn't seem to do the trick though as 3 minutes after the break, Southend were level once more when a corner kick was met by a free header at the back post to make it 2-2 and game back on. From this point, substitute Ben Stephens' began to dictate the play  in the centre of the park as the game entered the hour mark and his time and use of the ball was excellent, although chances were few and far between. Finally, as the game was looking edgy, he placed a ball through to Eren Muti who powered passed the defender once more to calmly slot home his second and Hatches 3rd to make it 3-2.

With 15 minutes left the game looked over as Joe Cloake, swung in a beautiful corner and was met by the on rushing Cam Ovel who bundled the ball over the goal line for 4-2 and the win was in sight. Nevertheless, to their credit, Southend continued to try to play football and look for a way back into it and they would seemingly get the opportunity as the often unplayable Eren Muti was shown a second yellow card for needlessly kicking the ball away after being warned by referee previously. Down to 10 men and with 10 minutes to play, it gave SHSB a renewed belief and it would be heightened further as Hatch again failed to clear a ball into the box and the ball was struck home to set a up a very nervy final few minutes. At this point, Mr Hoy and Mr Howell, stood at the side-lines, could barely watch as the ball was tossed into the box on several occasions but the defence stood firm and James Crowe settled the nerves with safe hands in the dying few minutes. The young men stood strong for 4 minutes of injury time and celebrations ensued following the referees final whistle as the Hatch claimed an enthralling 4-3 victory and an Essex Cup triumph.

A big congratulations to captain Ronnie Smurthwaite, the players, assistant Mr Howell and Mr Hoy, who, now in his 10th year at the school, has won his first ever football Essex Cup as a teacher (his 4th as player and teacher for West Hatch) and emulates his father, Mr Hoy Senior, who won the trophy 3 times in a row in the 1980s. Only 2 more to go sir.

Finally a massive thank you to all parents and staff who came down to watch and support the boys, I know it was very much appreciated and to Dagenham & Redbridge Football club for a super venue and hospitality.

Roll on next year and defending the cup...