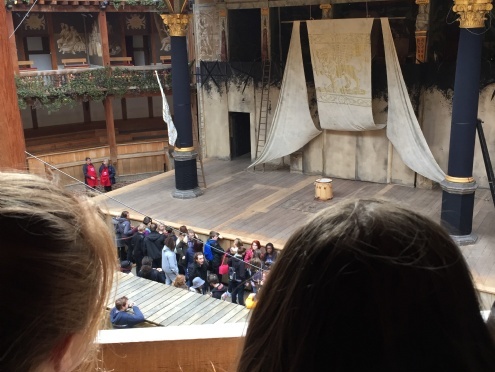 A group of students at West Hatch High School, Chigwell, watched a performance of Shakespeare’s Othello at the Globe Theatre, London.

A group of students at West Hatch High School, Chigwell, watched a performance of Shakespeare’s Othello at the Globe Theatre, London.

The production was specially created for a student audience.

Year 8 student Folusho Bello said: “Othello is a play based on romance and tragedy but in my opinion Othello is a complicated play to understand however the performance was excellent, the actors and actresses were very loud, clear and powerful.

“I felt Shakespeare wanted to deliver tension, drama, excitement, tragedy and romance to hold the audience’s attention, so they would remain attentive scene after scene.

“Compared to other Shakespeare plays such as Romeo and Juliet, which we are currently studying, I like Othello a lot better because in Othello I feel there are more exciting and dramatic scenes.”

Year 12 student Josie Creatini said: “Having heard 'Othello' to be quite a complex play in my opinion, after having seen this performance, I believe the actors interpretation was entertaining and easy for all to understand.

“Our seats were great as we could see the front stage as well as the whole inside globe from top to bottom.”

Year 7 student Lacey Mansfield said: “I really enjoyed the play because some of it was funny and some of it was emotional, the part when Othello and his wife died was really sad but at the end they all performed a nice dance and it was really fun to watch.”

Year 7 student Louise Bruce said: “The trip was an amazing experience. The performance was really good. My favourite part was when the people were fighting because it was really realistic. Also the band in the show were really good at playing their instruments.”

Teacher Lauren Menzies said: “It was a good opportunity for the students to see a Shakespeare play at the Globe Theatre.”